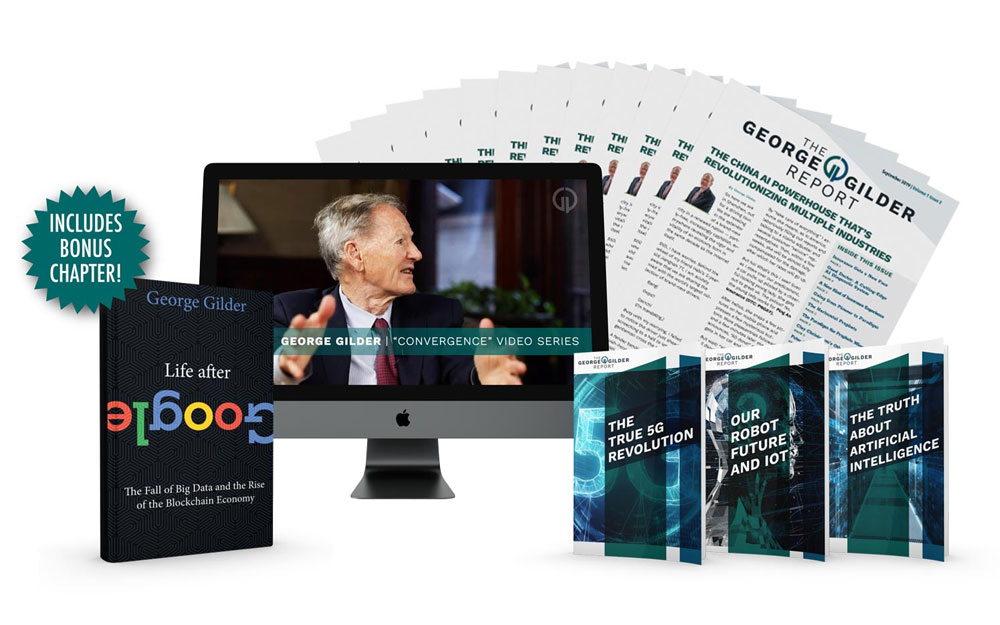 You can get the book for free by subscribing to The George Gilder Report today. By subscribing to the financial newsletter, you can learn more about the fall of big data and the rise of the blockchain economy, among other internet company changes in the coming months. 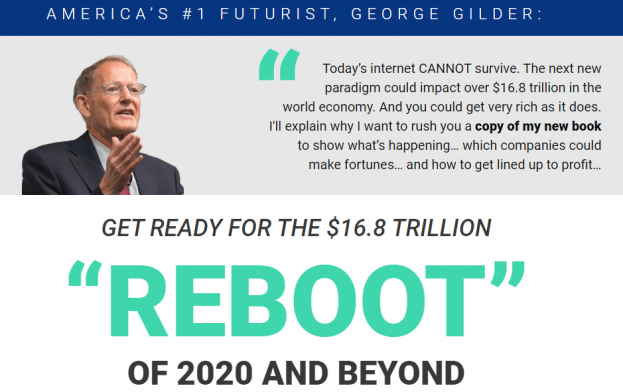 What will you learn in Life After Google? Should you subscribe to The George Gilder Report? Find out everything you need to know today in our review.

What is Gilder’s Internet Reboot?

Gilder’s Internet Reboot is a sales page for a book called Life After Google. You can access the book by subscribing to The George Gilder Report.

Life After Google is a new report created by George Gilder. The report discusses the end of big data – and the rise of blockchain companies.

According to George Gilder and his team, smart investors are switching their money away from data analytics companies like Google and towards blockchain companies instead.

George Gilder is promoting his Life After Google book through a new sales page. By subscribing to The George Gilder Report, you get a copy of Gilder’s Internet Reboot and several other bonuses.

The sales page described Gilder as “America’s #1 futurist”, claiming that the world is preparing “for the $16.8 trillion reboots of 2020 and beyond”. The George Gilder Report is an investment ideas newsletter that shares stock tips and other buying recommendations with investors. Gilder claims his investment recommendations had led to gains of 473% to 4,234% to investors, recommending companies like Analog Devices, Broadcom, and Qualcomm before they became mainstream.

Gilder has previously made headlines for briefing Ronald Reagan on the microchip in 1986 and forecasting the smartphone revolution in 1993. Now, he sees significant potential in the blockchain.

What is Life After Google? 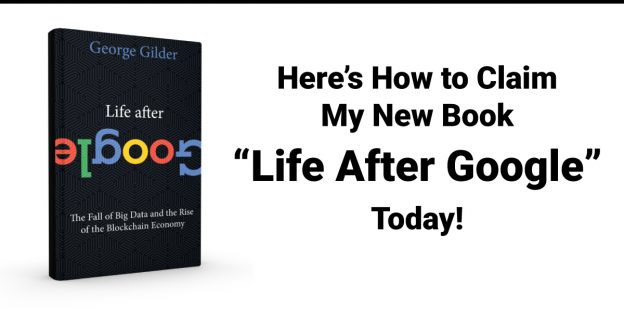 Gilder sees blockchain technology as the next internet revolution. He compares it to the internet and smartphones in terms of the impact it will have on society.

Over 200+ pages, Life After Google discusses a range of topics to support the claim. The book discusses the rise of hacking and security breaches, for example, and how one company could take over the blockchain space. 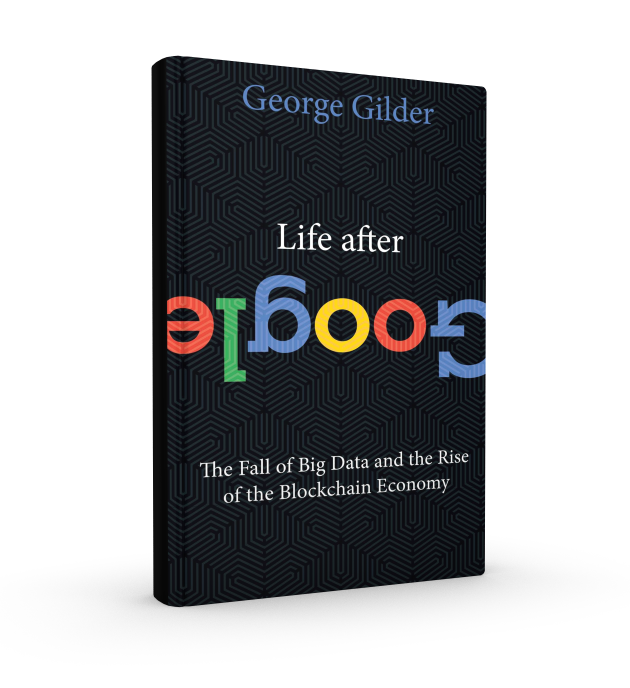 Some of the topics covered explicitly in Life After Google include:

Overall, George Gilder sees the upcoming shift as an ‘internet reboot.’ The internet isn’t going away. However, the companies leading the internet will change. Big data companies will fall, and blockchain-adjacent companies will rise.

Investment Opportunities in Life After Google

Life After Google discusses specific investment ideas with readers. The book talks about blockchain companies poised to capture the market over the coming years.

We won’t spoil the book with the names of specific companies. However, some of the investment ideas discussed in Life After Google include:

Gilder covers more than just blockchain. The report also discusses 5G and other investment trends. By following the investment ideas in Life After Google, investors can purportedly prepare themselves to make significant gains in the coming months.

You get a free copy of Life After Google and other bonuses by subscribing to The George Gilder Report today: 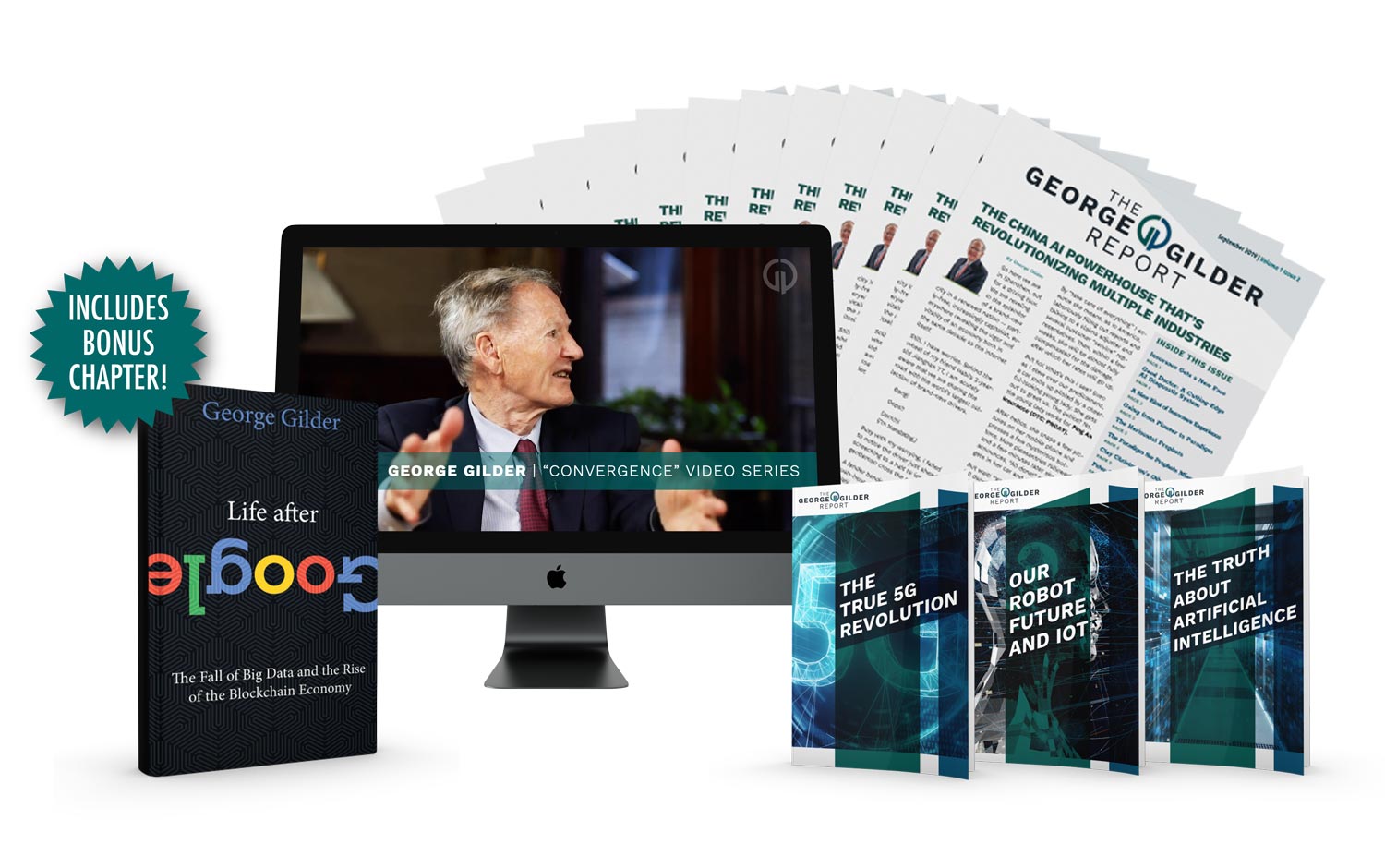 12 Copies of The George Gilder Report: George Gilder and his team send out an email newsletter every month. The newsletter discusses financial trends and investment recommendations, among other topics.

Extra Briefing #1: The Truth About Artificial Intelligence: This report discusses “why most of the experts you hear from on AI are dead wrong about where it’s headed,” including how to make money on AI. In contrast, others lose money by following mainstream trends.

Extra Briefing #2: Our Robot Future: This report discusses driverless cars, automated factories, homes that run themselves, and other smart devices increasingly becoming a part of our lives. It includes investment recommendations to help you stay ahead of the curve.

Extra Briefing #3: The True 5G Revolution: This report discusses 5G and how it works, including 5G investment opportunities you can capitalize on today.

Gilder 360: Whenever George Gilder speaks at a conference, subscribers get live access to the conference via Gilder 360. Gilder claims he has charged $100,000 speaking fees in the past, which is why Gilder 360 is a valuable opportunity.

Ask Me Anything: Each quarter, Gilder does an exclusive check-in with subscribers. You can ask him questions about future investment trends and more.

The George Gilder Report is typically priced around $200 per year. As part of the new promotion, however, you can join for $19 per year or less:

Lifetime subscribers get additional bonuses, including unlimited accedes to every special new report that George Gilder and his team ever created.

The George Gilder Report has a 90-day refund policy. You can obtain a complete refund at any point within 90 days.

George Gilder is an 80-year old American investor, writer, economist, and futurist. He became well known in the 1980's for writing a book called Wealth and Poverty. The book captured the attention of the Reagan administration, which distributed it as recommended reading to staffers and policymakers.

You can contact George Gilder and the Laissez Faire Books team via the following:

As part of a new promotion, The George Gilder Report is available for $19 per year with several bundled bonuses. New subscribers also get a hard copy of the book Life After Google, where George discusses the fall of big data companies and the rise of blockchain.

To get Life After Google or to learn more about The George Gilder Report, subscribe today.