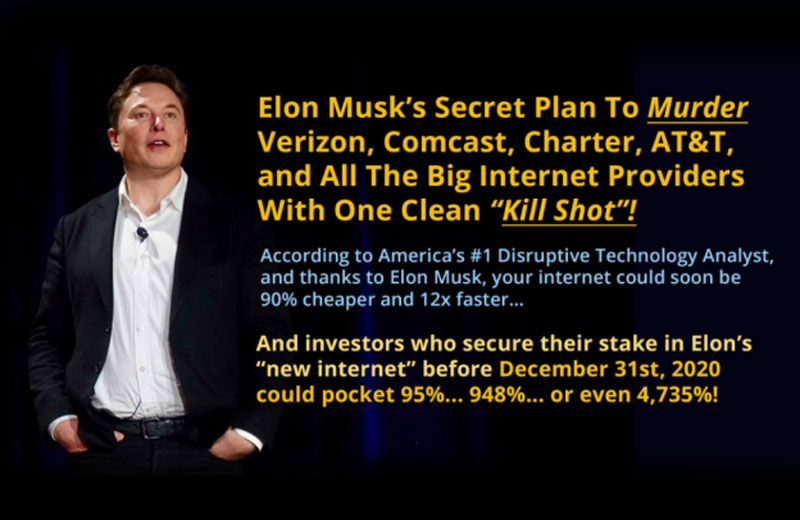 Lou Basenese and his Trend Trader team have launched a new marketing campaign featuring a soon-to-be-released technology from Elon Musk.

According to Lou Basenese, Elon Musk is preparing to launch a secret telecommunications technology that will disrupt the multi-billion dollar industry. That technology will purportedly end Verizon, AT&T, and other big telecom companies in the near future.

What’s the secret technology from Elon Musk? What is Project CMP? What should you invest in before December 31?

Find out everything you need to know about the new Lou Basenese Trend Trader marketing campaign today in our review.

What is Lou Basenese’s Trend Trader?

The newsletter aims to identify the next big trends before they become mainstream. By following the investment ideas in the financial newsletters, investors can purportedly earn huge returns.

Lou Basenese describes himself as “America’s #1 disruptive technology analyst” and the “billion-dollar man,” although it’s unclear how he earned those two titles. 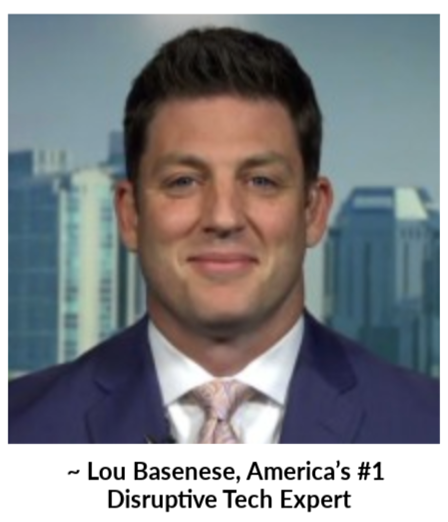 He claims to have identified and shared numerous tech trends before they became mainstream, helping ordinary individuals earn large returns on investment. Although it’s possible Lou Basenese is a successful trader, he’s nowhere close to being a billionaire.

Some of the topics covered regularly by the newsletter include:

By taking action before December 31, you can purportedly get a stake in Elon Musk’s upcoming technology – and maximize returns on investment.

What is Elon Musk’s New Technology?

The sales page for Lou Basenese’s Trend Trader discusses a secret new technology from Elon Musk. The page claims this technology will disrupt telecommunication companies as we know them, changing the world forever.

Elon Musk’s new technology will make the internet 90% cheaper and 12x faster, according to the sales page:

“…thanks to Elon Musk, your internet could soon be 90% cheaper and 12x faster.”

Why is Lou Basenese telling you this? Because he wants to make investors rich. By investing in Elon Musk’s new technology, investors can purportedly make returns of 4,735%:

Elon Musk will turn on his new internet on December 31, which will “change the world forever,” according to Lou Basenese.

Elon Musk’s space-based internet isn’t some secretive technology: it’s a much-publicized invention that has been hyped throughout 2020.

Starlink is a low-latency, broadband internet system designed to deliver internet around the world. It removes physical, land-based constraints of the existing internet. People anywhere in the world will be able to access affordable, fast internet.

SpaceX is targeting Starlink towards rural areas of the United States, Canada, and other countries. Consumers will be able to access the internet through a network of satellites.

To deliver the internet, SpaceX is constructing a satellite internet constellation. That constellation consists of thousands of mass-produced small satellites sitting in low Earth orbit (LEO). These satellites work with transceivers on the ground.

SpaceX will use some of these satellites for military, scientific, and exploratory purposes. Other satellites will serve consumers, delivering high-speed internet to rural customers.

SpaceX announced a public beta for Starlink in November 2020. The company plans to launch Starlink soon after – likely in early 2021. However, a specific launch date has not yet been announced.

You can learn more about SpaceX’s Starlink here.

How Can You Get Rich Through Starlink?

As part of the new marketing campaign for Trend Trader, Lou Basenese and his team claim investors can get rich through Starlink, enjoying returns of “4,743% or more.”

How can you get rich through Starlink? SpaceX is not a publicly-traded company, and you cannot buy shares in SpaceX before the launch of Starlink.

Despite these drawbacks, Lou Basenese claims you can earn huge returns when Starlink launches in 2021 by following his recommended investment strategy:

“If you’re looking to make the most potential money, you must act fast — before Elon goes “public” with his super-internet…the key to getting rich with Elon is to understand the proven 3-step formula he follows time and time again.”

Lou Basenese admits that SpaceX is privately owned, yet he claims Elon Musk may spinoff Starlink as its own private company.

Of course, if Starlink goes public via an IPO, it will be huge news, and many private investors will have already made their fortune.

“See, the biggest gains are always made by the people who get in early…The investors who get in BEFORE the IPOs…And that brings us to the great news I have for you here today…You won’t have to wait until it goes public to make a potential fortune from Starlink — because I’ve found a “secret backdoor” that could make you up to 47x your money in the coming months!”

To make a long story short, Lou Basenese claims to have identified a secret way to invest in Starlink before it goes public.

That strategy involves buying a publicly-traded company that is related to Starlink. That company is perfectly positioned to be purchased by Elon Musk when Starlink takes off. By buying this company today, you can indirectly invest in the success of Starlink.

We can’t spoil his investment strategy upfront. However, investors who follow his advice could expect big returns.

Lou Basenese seems to suggest investors will make a minimum of 95% returns by following his advice. He claims to have identified three profit scenarios, with the minimum returns being 95%:

“…as investors, we have just a small window of time to act to make the most money by riding Elon’s trend…And remember, if you’re able to move fast…I’m projecting THREE different profit scenarios here: 95% on the low side…948% for mid-point profits…And on the high side, a life-changing 4,743%!”

Lou Basenese claims you can enjoy all of these returns without inside access, without private connections, and without a significant investment. 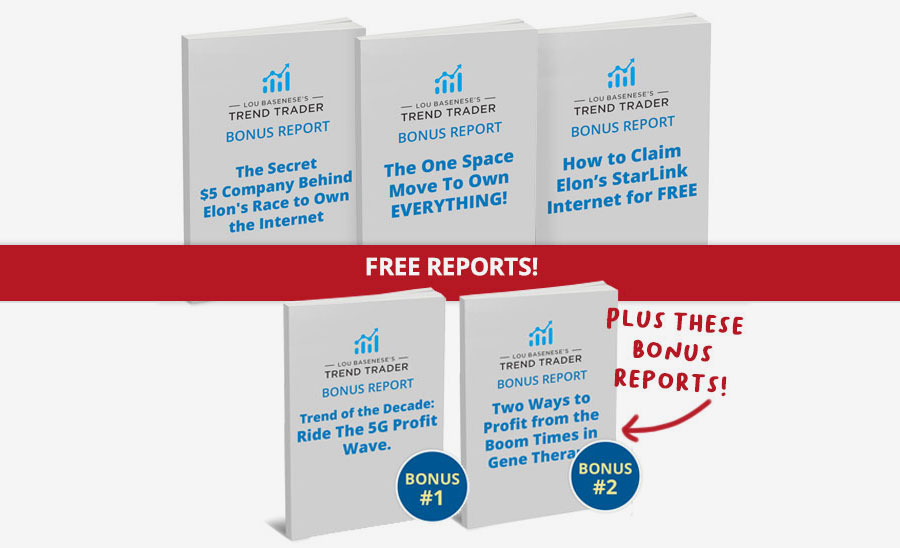 As part of a new promotion, Lou Basenese is bundling several bonus reports with Trend Trader. Here is what you get with all new subscriptions to Trend Trader: 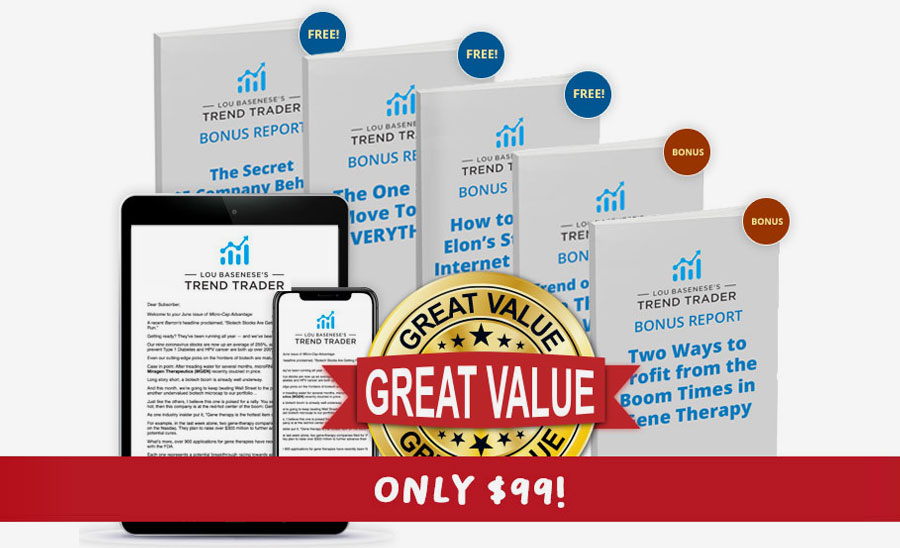 Report #1: The Secret $5 Company Behind Elon’s Race to Own the Internet: This guide covers the publicly-traded company mentioned above that is related to Starlink. Investors who buy $5 shares of that company today can purportedly get 47x returns on investment when Starlink takes off, according to Lou Basenese.

Report #2: The One Space Move to Own Everything: In this report, Lou Basenese explains how investors can make one move today to get a stake in all 31 companies vying for a piece of SpaceX’s profits.

Report #3: How to Claim Elon’s Starlink Internet for Free: In this report, Lou explains how to register for Elon’s Starlink for free, including the specific URL to visit to sign up for the free trial of Starlink anywhere in the world.

Bonus Report #1: Trend of the Decade: Ride the “5G Profit Wave”: In this report, Lou explains how to invest in 5G wireless communications technology for maximum returns. Lou claims the industry is expected to grow 75,000% over the coming years. 5G is no secret to investors, yet Lou claims investors are approaching the industry wrong. In this report, Lou discusses a $3 stock poised to skyrocket as 5G rises in popularity.

Bonus Report #2: Two Ways to Profit from the Boom Times in Gene Therapy: This report discusses the gene therapy world, including how researchers are editing genes to control certain areas of human health. Researchers can replace faulty genes with healthy ones, for example, eliminating the root cause of certain diseases. It’s a breakthrough world of human health, and Lou explains how to invest in this sector in this report.

Trend Trader is priced at $299 per year.

You can pay online using any major credit card. One year after buying Trend Trader, your subscription is automatically renewed at $299. Your subscription will continue to be renewed every year until you cancel.

All products are digital. You will receive digital copies (PDFs) of all bonus reports above immediately after your purchase is confirmed.

You can request a complete refund within 30 days of your purchase. Email support@crowdability.com to request a refund. A representative will call you to verify. You can only cancel after the representative contacts you by phone.

Trend Trader is published online by a company named Crowdability.

Crowdability is an “equity crowdfunding” platform. Because of new US regulations for investors, investors can buy a stake in companies before they go public – just like venture capital firms today. Crowdability aims to protect investors as they invest in these high-risk, high-reward startups.

By following Trend Trader’s investment system, investors can purportedly earn returns as high as 4,700% as Starlink goes mainstream in early 2021.