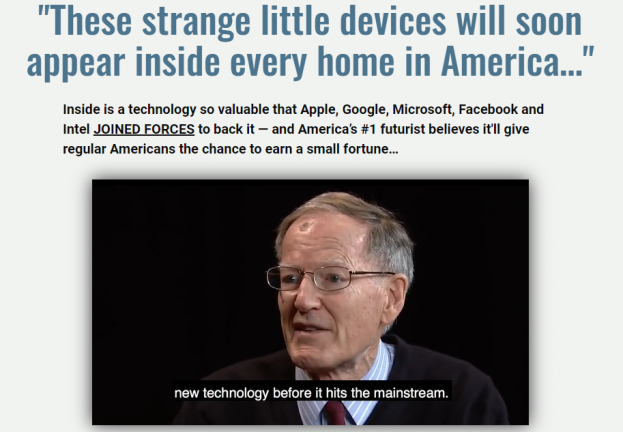 The George Gilder Report has launched a new marketing campaign for its email newsletter.

That marketing campaign features George Gilder discussing “strange little devices” that will soon appear inside every home in the country.

By subscribing to The George Gilder Report today, you can discover what these devices are – and how investors can take advantage.

About The George Gilder Report

The George Gilder Report is a monthly financial analysis newsletter. The newsletter is dedicated to uncovering little-known investment opportunities, giving investors ideas they could use to earn huge returns.

George Gilder has been a “technology prophet” for decades. He has advised presidents on future tech trends.

Some describe George Gilder as the most knowledgeable man in America when it comes to the future of technology and how it impacts his life. Today, George aims to share his wisdom with investors through The George Gilder Report.

George Gilder is an American writer, investor, and economist. The 81-year old serves as editor in chief of Gilder Technology Report and the Chairman of Gilder Publishing, LLC.

Gilder also worked as a speechwriter and economic advisor at high levels in the United States government. He famously wrote a book called Wealth and Poverty that became popular with the Reagan administration.

What Are the Strange Little Devices that Will Soon Appear Inside Every Home in America?

As part of a new marketing campaign, George Gilder and his team have launched a series of eBooks discussing artificial intelligence.

George Gilder wrote a book called Life After Google, where he predicts Google and other companies' death focused on big data. As big data companies die in the coming years, blockchain companies will rise. 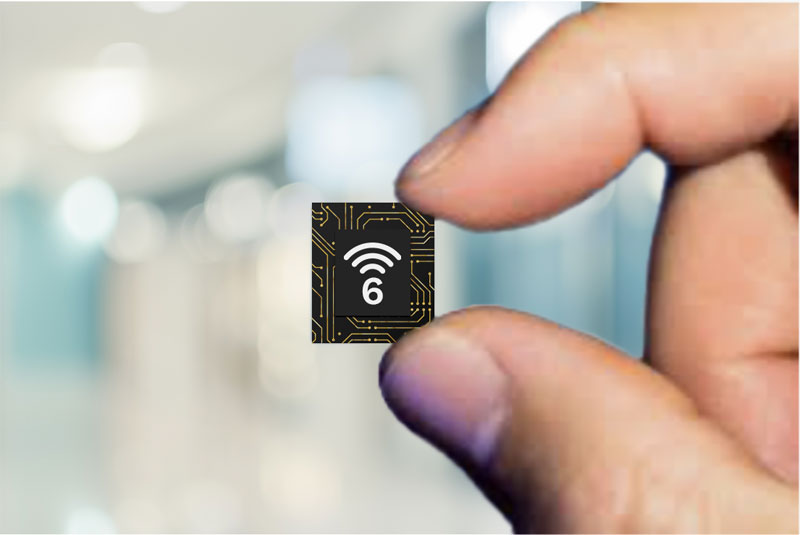 In addition to Life After Google, George wrote a bundle of reports discussing artificial intelligence, robots, IoT, and 5G, among other topics.

You receive all of these reports by subscribing to The George Gilder Report today.

But what are the “strange little devices [that] will soon appear inside every home in America”? What is George discussing in his recent video?

George discusses a 35+-year-old decision from the United States government that sent a shockwave through the tech industry on his sales page.

However, without Docket 81-413, many consumer electronics would not exist. Docket 81-413 indirectly paved the way for your laptop, tablet, smartphone, and video streaming platforms like YouTube.

“Uber… Facebook… Google… Samsung… Intel… IBM…None of it would exist. Though most people have never heard of it, I’d say Docket 81-413 has probably generated more wealth for more people than anything else in modern history. It was one of those rare moments that changed the fate of humanity – like the invention of the printing press… the radio, TV, antibiotics, fiber optics… or the creation of the first microprocessor.”

George discusses a man named Michael Marcus who “should go down in history as a champion of American capitalism,” explains George, despite very few people have ever heard his name:

“His name was Michael Marcus. And though you’ve likely never heard of him before… he should go down in history as a champion of American capitalism…Marcus wanted to see what would happen when the government released its grip on the spectrum. He believed the spectrum was SO valuable that it at least a part of it deserved to be open to using for entrepreneurs.”

To make a long story short, the combination of Michael Marcus’s vision and Docket 81-413 changed American telecommunication history forever. It allowed private companies to innovate the spectrum for wireless communication, ultimately creating many wireless technologies we know and love today.

If you didn’t invest in wireless communication technology in the 1980s, you have a second chance today. George claims he’s spotted another key moment for the technology space – and he knows how investors can capitalize on this change.

What is the Small Computer Chip?

To make a long story short, the computer chip discussed by George Gilder allows new technology to access and share the 6GHz part of the wireless communication spectrum for the very first time.

George is extremely excited about this chip – and he claims he’s not alone:

“If history is any guide, this may well prove to be the single most valuable technology of the 21st century. So much so that every single major tech firm in America is backing it.”

How can investors make money from this chip?

George tells investors to consider the following sectors, which he believes will grow enormously over the coming years:

As George explains, there’s a lot of money at stake here. In fact, he believes there are trillions at stake:

“I couldn’t say for sure. It could be less. It could be a lot more. That’s the nature of something this big. These are “best-guess” estimates from industry insiders. But be in no doubt about one thing: There are TRILLIONS of dollars at stake here. Make no mistake about that.”

To learn more about George Gilder’s prediction for wireless communication technology, you need to subscribe to The George Gilder Report today.

As part of the new AI-focused marketing campaign, George and his team have bundled several reports with new subscriptions. You can receive several bonus eBooks and PDFs for subscribing to The George Gilder Report today, including a copy of George Gilder’s Book Life After Google, which discusses why big data companies will fall, and blockchain companies will rise. 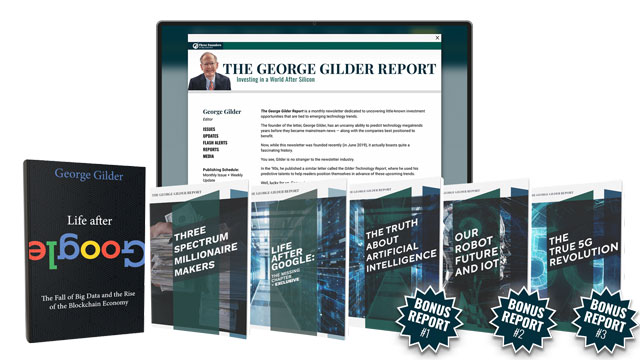 Items included with new subscriptions to The George Gilder Report include:

Three Spectrum Millionaire-Makers: In this eBook, George names three specific stocks that he believes will profit from the new unlicensed spectrum. The last time this happened, it created one of America’s greatest ever stock opportunities.

Life After Google: All new subscribers receive a free copy of Life After Google, George’s book that discusses big data companies' downfall and the rise of the blockchain economy.

Life After Google: The Missing Chapter: George recently added a “missing chapter” to his eBook. This chapter cannot be purchased anywhere. It’s reserved specifically for subscribers to his newsletter.

Bonus #2: Our Robot Future: This report discusses why robots will rule our future, including how driverless cars, automated factories, and smart homes will dominate the future. George cites one report showing that 70% of companies could automate significant portions of their workforce.

Bonus #3: The True 5G Revolution: 5G has dominated headlines in recent years. In this book, George discusses why many experts are wrong about 5G. He also explains how investors can make big gains on 5G as it continues to roll out.

Bonus #5: Ask Me (Almost) Anything: Every quarter, George checks in with The George Gilder Report subscribers to answer questions. He can’t offer personalized investment advice, but he’ll answer virtually anything else.

The George Gilder Report is priced at $199 per year. 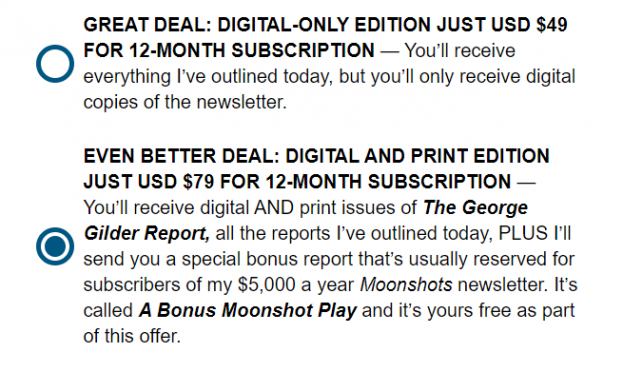 However, when purchased through the new marketing campaign, the price drops to $49 to $79 per year:

When you subscribe via Gilder Press, you agree to an automatic subscription program. Your credit card will automatically be charged one year from today, and you will receive a new one-year subscription to The George Gilder Report. You can cancel your subscription at any time. Your subscription is automatically renewed at the normal price of $199 (regardless of whether you paid $49 or $79 for your first year).

The George Gilder Report comes with a 6-month refund policy. You can request a complete refund on your purchase within the first 6 months of your subscription.

In other words, you have three full issues to decide if The George Gilder Report is the right choice for you. If not, you’re entitled to a complete cash refund. Since all products included above are digital, you don’t have to return anything to complete the refund – the products are yours to keep.

The George Gilder Report has launched a new marketing campaign featuring spectrum band investment opportunities. For the first time since the 1980s, the United States government is opening up bands of the wireless spectrum for sale. The last time this occurred, it led to a surge of innovation and entrepreneurial activity – and George believes something similar will happen this time.